Charity is a great thing to do. We all know the personal benefits of donating money, time or energy to causes that are close to our hearts, but there is something to be said about companies motivating their employees to take part in charity work under their roof.

Our client, law firm Fladgate, have recently hosted Tour de Fladgate: two weeks of charitable activities, collecting donations for Whizz Kidz and Richard House Children’s Hospice. We thought it was a great opportunity to share why we think charity events like these are so important for businesses, so we joined their closing ceremony and chatted to their enthusiastic team for some insight into the matter.

Of course, supporting a great cause is reason enough to host charity events or encourage your team to participate in charitable activities. But if you’re still not convinced, there are plenty of reasons why it’s also good for business. 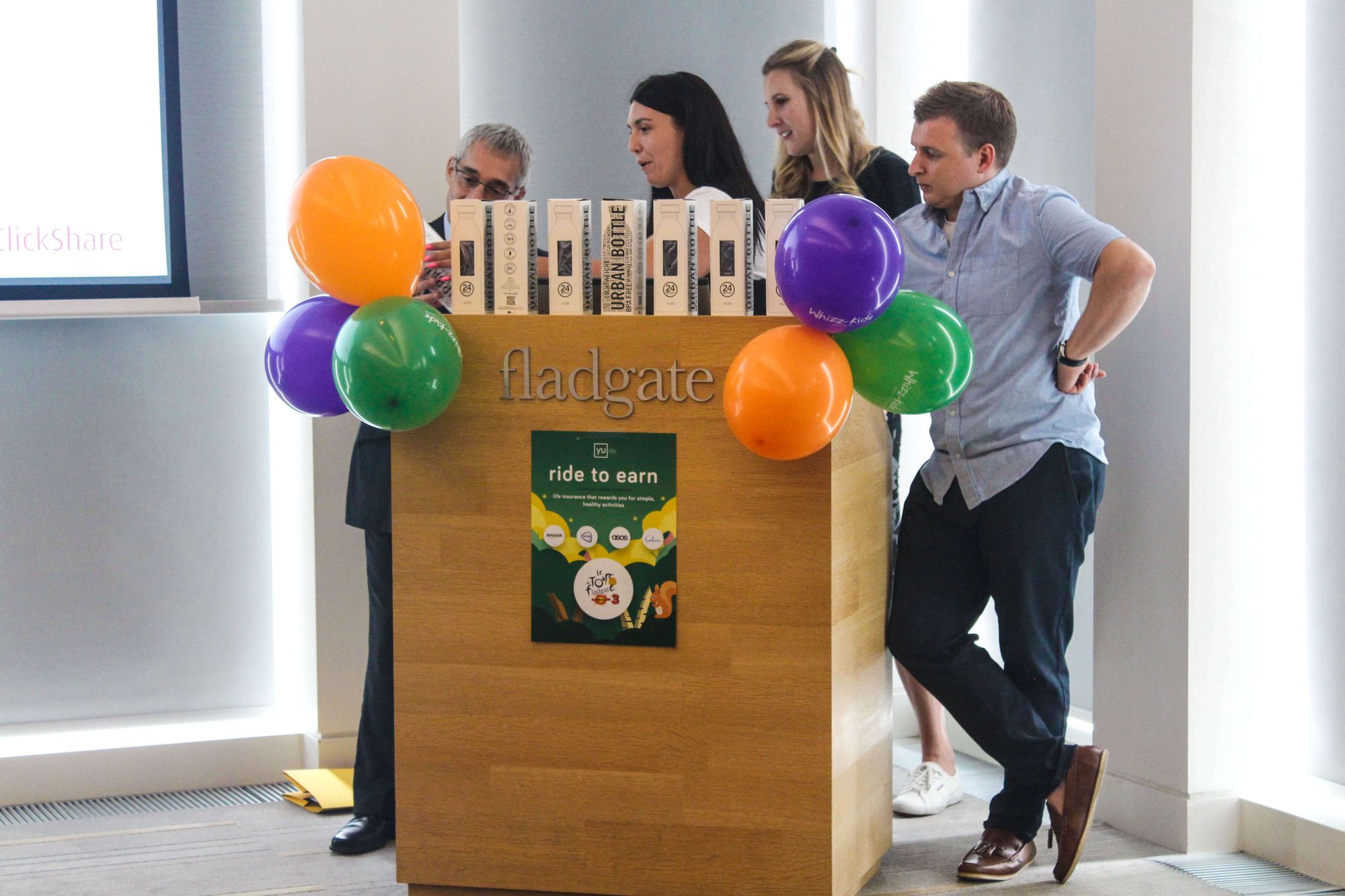 Getting your team involved in charity is a great way to improve their wellbeing. Studies show that charity makes people happier, which in turn, makes them healthier and more engaged with your company. And of course, if you’re choosing a charity that includes physical activity (such as a charity run), you’re getting all the benefits of a physically healthier workforce as well.

Charity also makes employees feel like their workplace is about more than just profit - that it has a bigger mission. Today, employees aren’t only looking for an easy 9-to-5: they want to feel like what they do matters. Charity is a great way to show that, which in turn helps with attracting these passionate people every company wants, and then retaining them.

“Tour de Fladgate was an opportunity to engage the departments with a wider cause outside of work. Unfortunately, it’s something that is not offered in every firm, so it’s a great way to do something different, and it was very important to me,” tells us Josh Bennett, a Trainee Solicitor at Fladgate, who acted as one of the Team Captains for Tour de Fladgate.

Charity work can also promote stronger personal connections on both a company and a team level. By involving people from all departments, charity days can connect between people who otherwise wouldn’t have had the chance to meet, create cohesion between employees from all parts of the business, and encourage team-building while doing something for a good cause.

“The big thing for us is that fundraising events get everyone involved. It doesn’t matter which department you’re in or what your level is, what matters is taking part, getting people active, getting people doing something they haven’t necessarily done before, and it has fitted perfectly with the launch of yulife,” Chris Humphreys, Senior IT Infrastructure and Applications Manager and one of the Team Captains, explains. 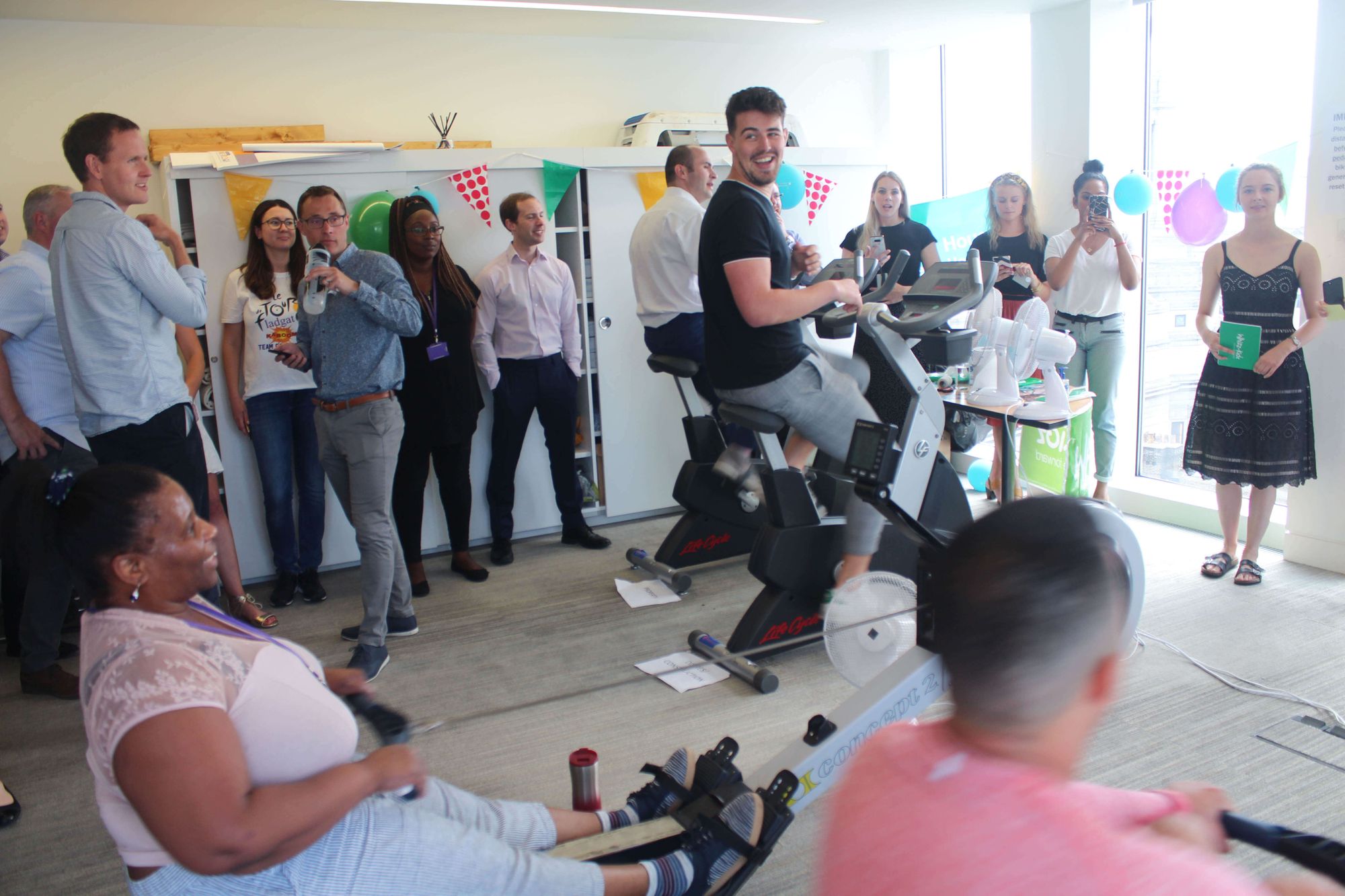 “As the property department, people have really come together,” Josh agrees. “We want to be involved in it, we want to show that we’re united, we want to win. So we’ve raised about £1,000, just us, in the last 3 days. It just shows that when people do engage and get involved together they can make a real difference - from small contributions that join up to create a bigger impact”.

Charity helps build better teams and boosts morale internally, but it also works externally. Being able to show that your company participates in important causes presents a better brand that people are more likely to trust.

All hands all deck

In their third year of hosting the event, Tour de Fladgate 2019 lasted 9 days and included a stationary bike and rowing machine competition between the four teams: Business Services, Property, Dispute Resolution and Corporate. The winners were chosen based on distance, speed and donations. The teams travelled 3,936.3km over 9 days, which is more than the distance between Dublin and Ankara!

The competition element made the teams feel more united, and increased the level of donations compared to what a company would normally manage to raise in a similar event, making the total amount a whopping £10,834 including gift aid.

All donations were made to the firm’s 2019 charities Whizz Kidz and Richard House Children’s Hospice. “Each year we select 2 charities to support for the year – one local and one national,” says Clare Jones, Head of HR at Fladgate. “Our CSR activities and events over the year are all driven towards these 2 charities”. 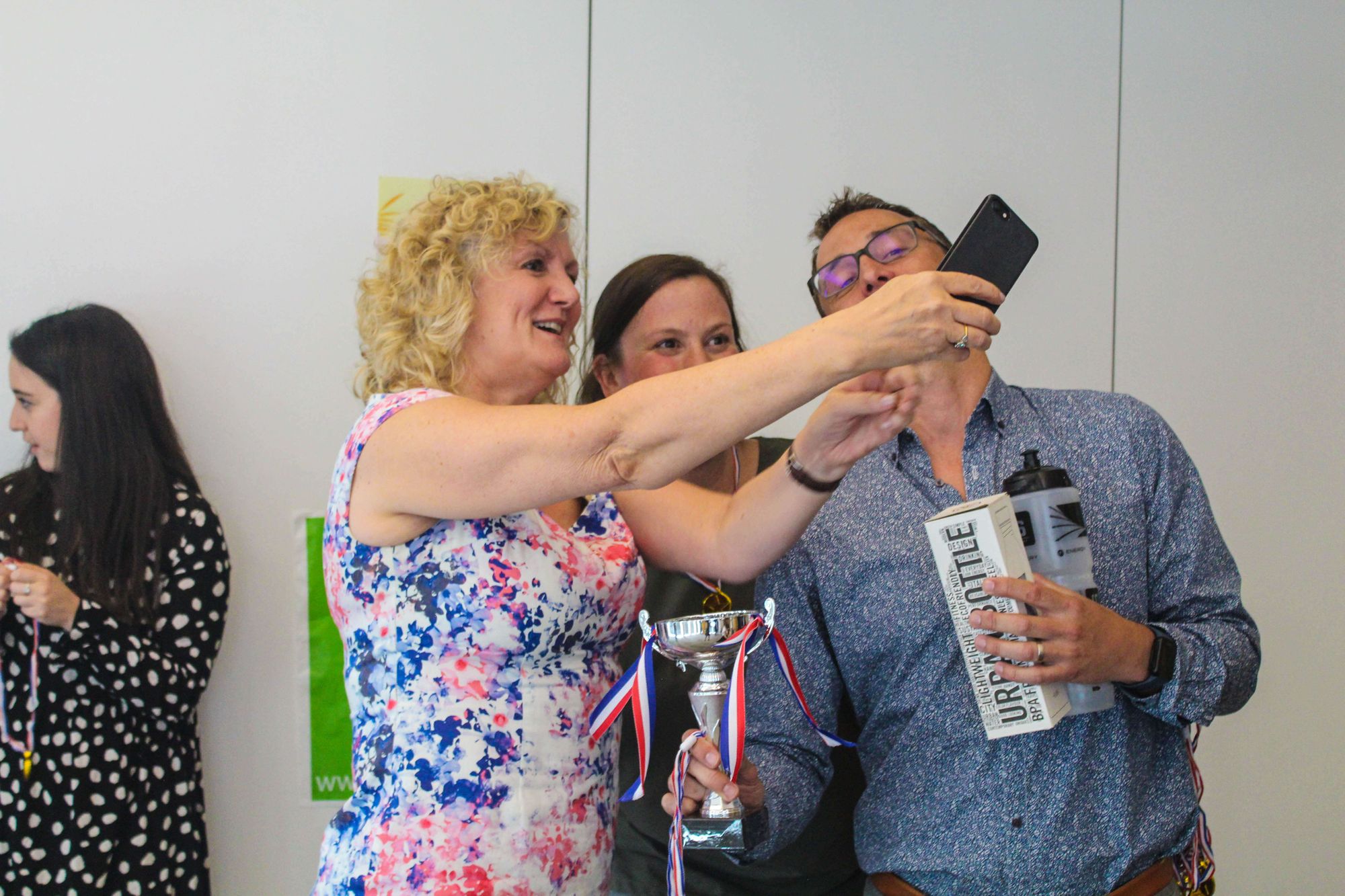 Tour de Fladgate saw amazing levels of participation, with over 50% of staff becoming involved. “The turnout itself has been fantastic,” Chris excitedly tells us. “Out of 59 people in Business Services, 45 people joined in!”.

“Everyone has been a lot more involved, they feel like they’re here not just for their job, they’re doing something that’s fun and a little bit different,” Yulia Leyko, Senior Associate and one of the Team Captains agrees. “It’s a great initiative, not only does it raise lots of money for charity, it’s also great for our wellbeing and morale at work, and a lot of people were getting involved. It’s about getting people to meet more people around the firm and spend more time away from their desks”. 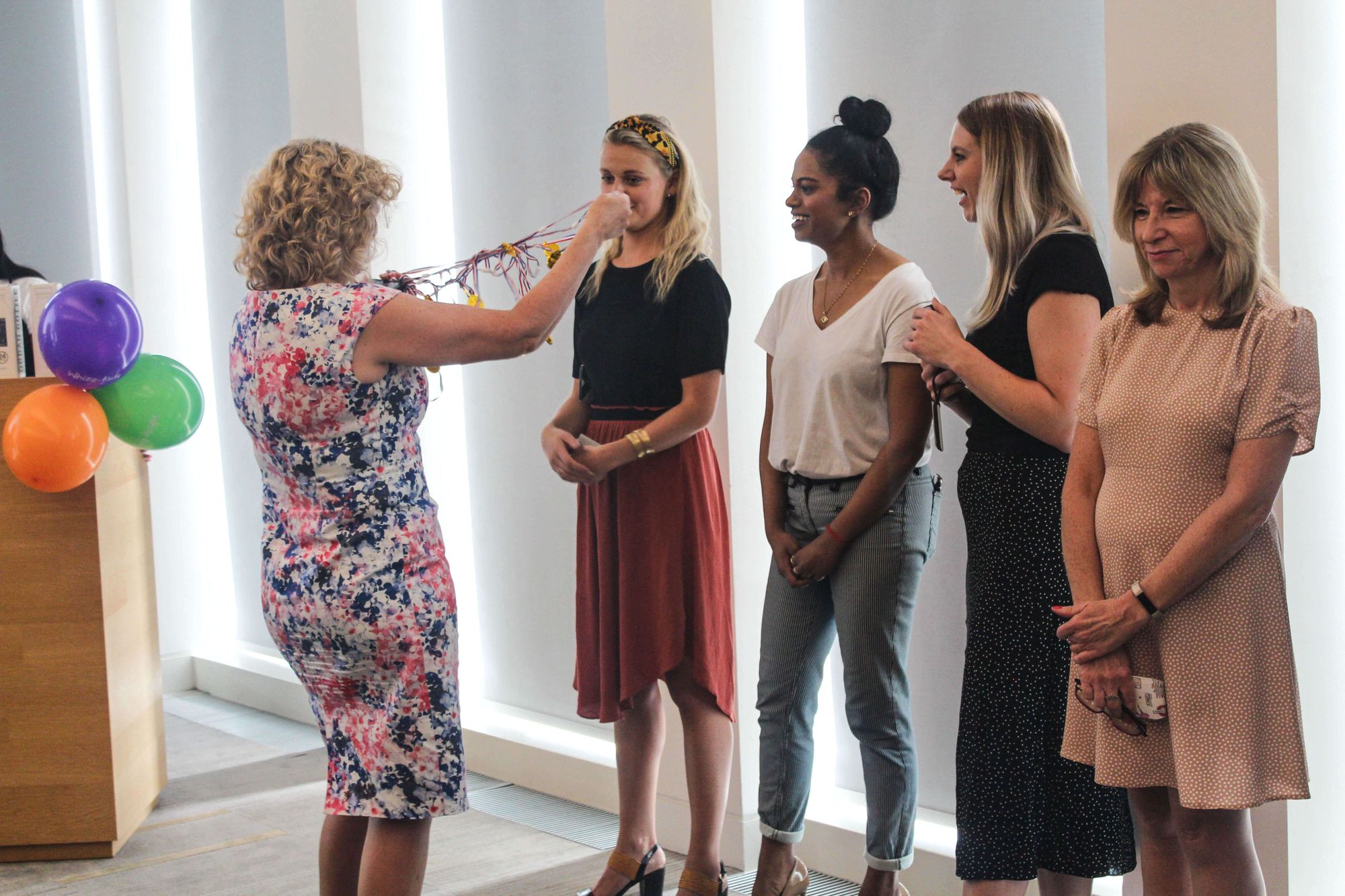 “I think businesses need to realise that actually, it’s not all about work,” Josh explains why he thinks Tour de Fladgate was so successful. “They have the ability and the power to engage with something bigger than themselves. People make a lot of money, and actually, if they can dedicate half an hour to an hour to show that they’re engaging with this and then donate some money on top, they can make a huge difference to people who will really benefit from it, simply by jumping on a bike or a rowing machine and showing their support”.

“Corporate social responsibility is a big part of any business nowadays,” Yulia stresses the importance of charity in the workplace. “Everyone should take responsibility for it. We should all try and make the world a better place, so it’s crucial for companies to encourage their employees to do so in an engaging way”. 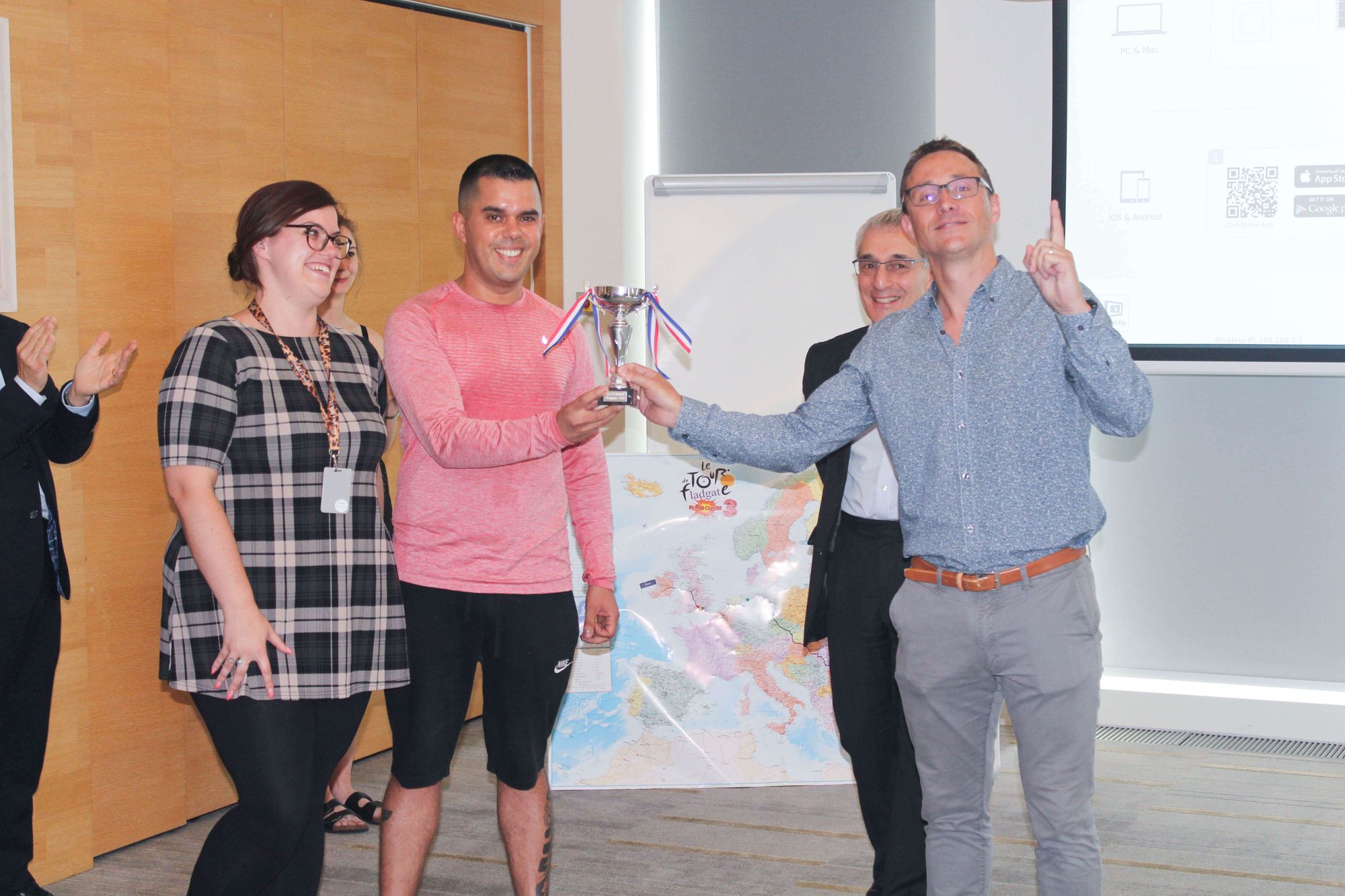 yulife tries to help clients engage their staff with their charity days. Giving participants extra yucoin - the wellbeing currency which can be exchanged for gift cards and rewards - is one way we do this.

With Tour de Fladgate, we gave participants yucoin for their time on the rowing machine and the bike. “The yucoin have been a great incentive to get people joining in,” Jess de Duve, HR Assistant at Fladgate, shares. “We raised more than last year, and for me as well, I was thinking ‘I can help a good cause and also get my ASOS voucher!’”.

“The yulife app has been a huge encouragement to get involved,” Josh explains further. “People like the coins, the ability to take the time on the bike or rowing machine and get yucoin on the yulife app has made a difference with people engaging with it. They’re being rewarded for their time on the bike or rower in ways they wouldn’t have been before”.

Another great thing about the yulife app is that it allows your team to donate their yucoin to a charity of their choice, through the For Good Causes platform, which can maximise donations.

The leaderboards on the yulife app are yet another incentive to participate as much as possible. “A lot of people in the department have been getting really competitive, looking at the leaderboards and how much they’ve done,” Yulia laughs. “It’s been a great talking point for everybody involved”. 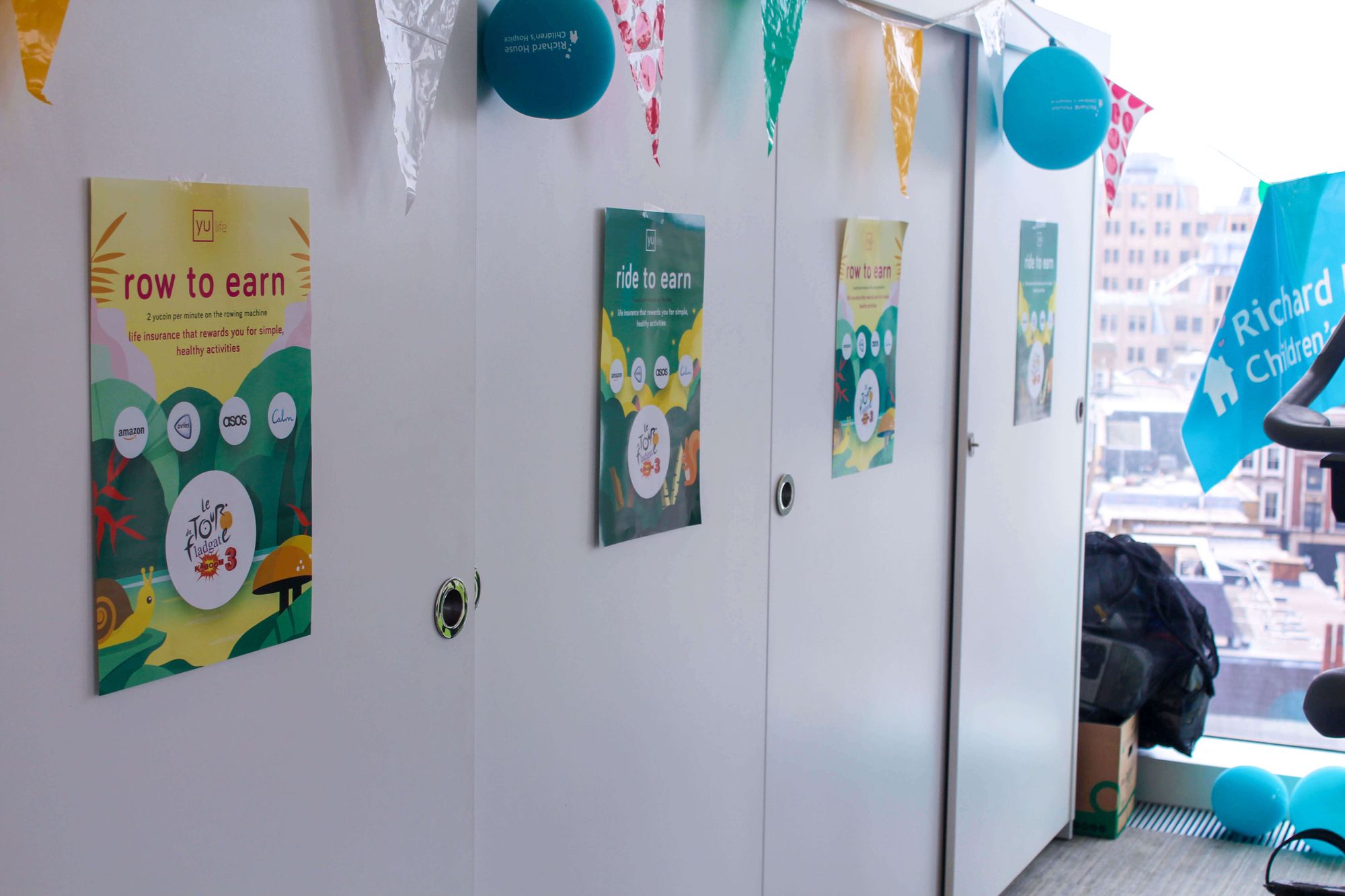 Of course, yulife doesn’t only help during charity events. With our app, your employees can constantly earn yucoin through healthy activities such as walking or meditating, and then exchange their yucoin for Avios air miles and gift cards from brands like ASOS and Amazon, or donate them to charity if they wish - creating a culture of wellbeing at the office every day.

“I’ve been using the yulife app since day one,” Sophia Tucker, HR Advisor at Fladgate, shares her experience. “It’s perfect for me personally, because I walk to work and I can do my challenges there and get some yucoin, so it’s extra motivation for that. But I also heard lots of people in the company talking about it, saying that it’s a nice benefit to have, and how they’re grateful for it”.

If you want to learn more about yulife and how the benefits we offer are valuable for your team in the long and short term alike, book a demo with one of our experts.

A yulife Story: Welcome Aboard

How to Build a Benefits Scheme That Maximises Value

It’s extremely difficult to build a benefits scheme that does everything you want it to, but there are a few things you can do to maximise its impact.

The Business Case for Life Insurance and Wellbeing

Getting senior management to understand the benefits of life insurance and wellbeing has never been easier.