On the 30th of November, the yulife team hauled up to Edinburgh to present at Vodafone Partner Fibonacci Communications’ Christmas event.

This black-tie event took place in the Dakota Hotel in Edinburgh, starting with a presentation from the CEO of Fibonacci Communications, Scott Christie, which was then followed by a casino-themed social evening. 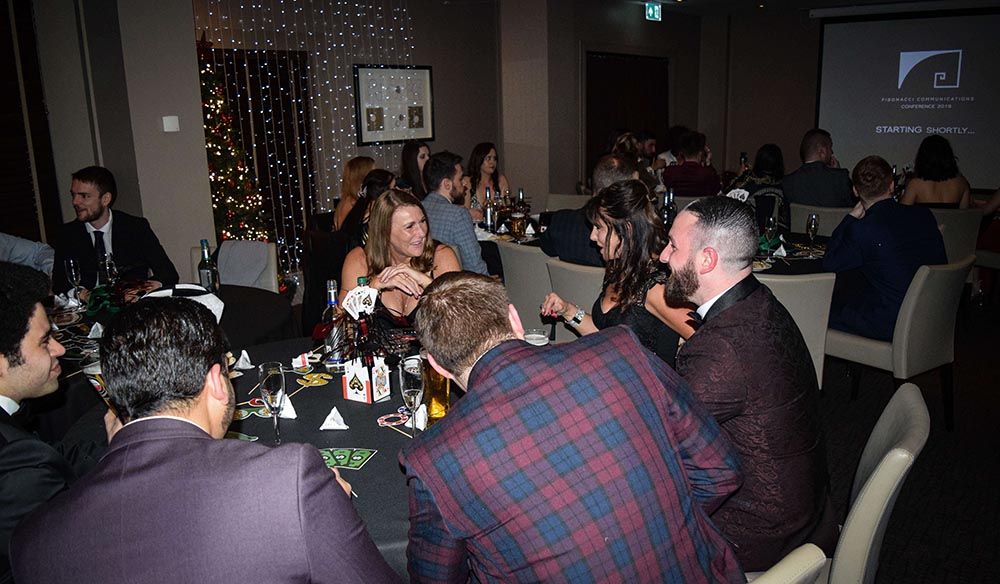 Scott used the occasion of getting employees from his three branches together to share some insights about their work in the past year, as well as explaining the name of the company. “The Fibonacci mathematical sequence takes values that already exist and makes something much larger - we want to do the same with our company,” he clarified.

Despite talking about serious topics like future projections and customer, environment, training and sales statistics, Scott has made sure everyone had their attention on him with hilarious videos and an overall great atmosphere, full of banter, that wasn’t lost on his employees. “It’s so inspiring that Scott is looking after us like this - we’re really grateful for it,” said Stephanie Murdoch, Sales Advisor at Fibonacci Communications.

Indeed, anyone in the room could see the dedication and excitement seeping through Scott’s words. Truly invested in his company and his employees, Scott also made sure his team knows exactly what is offered to them in the form of benefits, helpful apps and working conditions. Scott was visibly proud of being a revolutionary in the Vodafone Partner family, leading the way with his approach to charity and benefits for his team.

“If I’m honest, at the start, I didn’t know so many benefits existed,” said Scott. “I was surprised that there were so many options for charity and benefits, but I immediately welcomed them. I absolutely didn’t want my team to lose out on the opportunity to have life insurance, which they had with Vodafone. I had to make sure they got the same thing as well.” 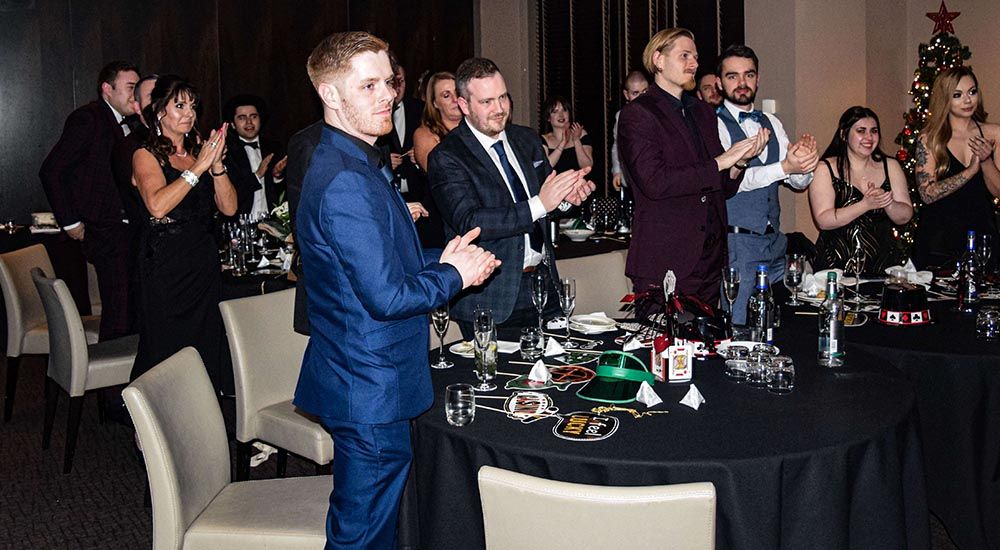 At the event, Scott also revealed the reason for the casino theme, named “Operation Blackjack” by his 8-year-old son, Joshua: this year, whoever manages to complete their sales goals before Christmas, will be entered into a raffle with the first prize being an all-inclusive trip to Las Vegas! It’s no wonder, then, why Fibonacci Communications’ managers team chose to present Scott with an award to thank him for being such an amazing employer.

yulife were also invited to come speak at the event to talk about the yulife benefit, and hand out prizes to the winners of the step competition that finished a few days before. “The competition yulife hosted for this event has made me walk more,” Jake Robinett, Sales Advisor at Fibonacci Communications, who won second place, admitted. “Fitness is something that I take seriously, and having something to actually track those things goes a really long way.”

“I think any company or Vodafone Partner should get yulife for their team,” Gail Newton, Project Specialist at Fibonacci Communications and winner of the competition, said. “It’s absolutely fantastic, their offer is amazing. Everyone is so grateful to Scott for setting it up, and even people who don’t work for the company, like my sister, asked how she can get on it because she walks a lot!”. 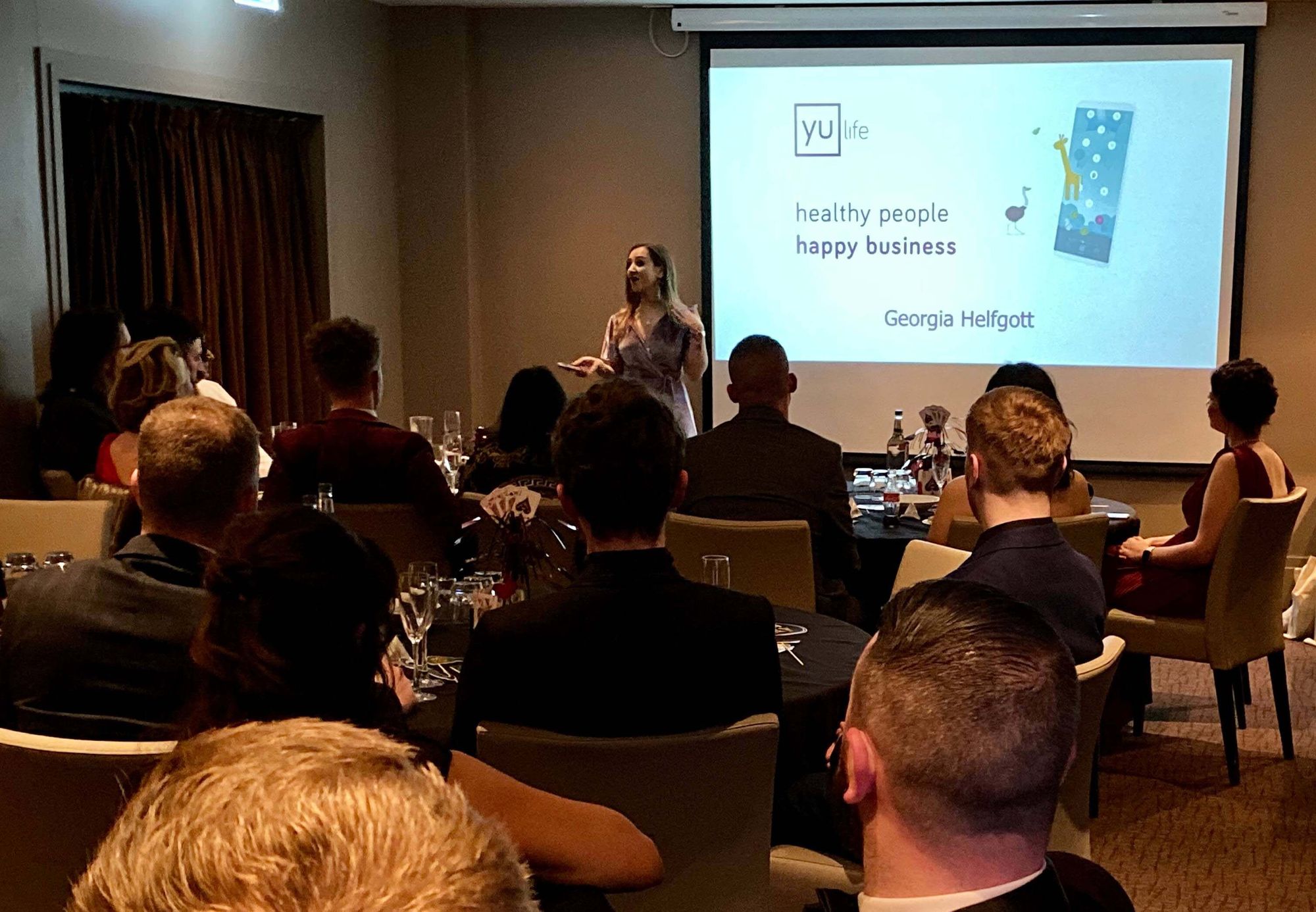 “I like the mindfulness challenge, and I’m trying to get more into the 30-minute walking challenge to get fitter,” Stephanie told us. “I find the mindfulness part the easiest, for me, it’s more of a challenge to start doing the long walk ones. Those challenges have helped me to walk more, it’s getting the endorphins going! You’re completing the challenge and you hear it when you get the yucoin, so it actually reminds me to do my exercise.”

“I can’t stop raving about yulife to other Vodafone Partners, I think that any Partner in the same position that I was 10-12 months ago absolutely should check this out and speak to the team,” Scott agreed. “I was in the process of moving employees over from Vodafone to my company, and I needed to find a life assurance option. When I compared products, yulife were just streets ahead. I really enjoyed the idea of the app, the rewards for steps and the competition. You might have guessed, my guys are fairly competitive, so the leaderboard works fantastically for us.

“It’s just a great service: really enjoyable, fun, lighthearted but with a serious undertone, it finds the balance really well. You need life insurance for your team - so why not get the best?”.

On the 30th of October, 85 HR professionals joined us for a panel discussion about creating a culture of wellbeing at work. Read more for some of the insights they shared.

Bestselling author Dr Chatterjee joined us for an event to discuss how to stop workplace stress to get happier, healthier and more productive employees.